Holding in the Storm: My Life with Autism

Our new film was launched on 29 March 2014 in the Arboretum Centre, University of Guelph. The two premiere screenings were well attended and well received by about 250 people. Guelph’s Mayor Karen Farbridge joined us for the afternoon event to bring the City’s greetings and to link the event with World Autism Awareness Day which is being observed on 2 April for only the second year in Canada.

Now the film has been posted on youtube at Holding In The Storm. You can view it there and add your comments.

We hope that people will care enough about the film’s message to view it on DVD and discuss it in the company of family and friends, co-workers and fellow students. We offer a DVD copy of the film inserted into a 48-page Discussion Guide for $10 plus postage. The guide poses questions based on the film and provides good information about how Autism Spectrum Disorder is experienced in adulthood. Contact us at ebloomfi@uoguelph.ca to request copies.

Some individuals and groups are planning events around the film and facilitated discussion. One is planned in Ottawa for the evening of April 14—you can pre-register at info@citizenadvocacy.org

Please also post your thoughts, questions and comments in this blog.

The film will be a success when it makes a difference in people’s lives. Please share your experience of the challenges and success stories!


The film was inspired by our Bridges-Over-Barriers group of communicators who have to communicate in other ways because we cannot speak reliably with our voices. My 2002 poem "What it's like to be me" forms a theme through this film. We thought that the main purpose and outcomes of film would be in helping non-autistics to get a better idea of what it's like to live with severe Autism. One unexpected result of the movie is that it made me think more about what it's like NOT to have Autism and to be "neurotypical". I am now a bit more interested in fiction and drama than I was before. This is a poem I composed last week about this different point of view.

I wonder about you
AB 9 Apr 2014
I never used to wonder
what it was like to be you.
I always knew I was different;
I always wanted you to learn
what I was like inside.
The part about you having
things I might be curious about
is a new experience for me.

I think my conversations
have been focused
on me as the subject.
I am learning to wonder
what is going on inside you.
It is a new thing
for me to wonder
about you
who I do not really know.

You are a person in the blur
of the greater world
and if I did not know you,
you had not existed for me.
If I cannot see past my circle
I could not connect
and you were not distinct
or separate from the world.

I now wonder
what makes people tick,
and that the universe is made up
of you and you and you
and a million others like you.
I have so many people
to meet and learn about.
The world is
a large place indeed.
Posted by Andrew at 13:32 No comments:

Announcing HOLDING IN THE STORM: MY LIFE WITH AUTISM

The short dramatic film Holding In the Storm takes place partly in a park and partly in a university lecture theatre. Our main character, Matthew, has severe Autism and is unable to communicate with his voice. He expresses himself through his “thought voice”. We feel the visible and at times invisible social barriers caused by his lack of speech as Matthew and his companion dog are approached in the park by another character, Dave. We get a sense of Matthew's witty and intelligent character; we feel his happiness, sadness and frustration. All this reveals the many layers of his complex life. Another character, a university professor, uses a poem to challenge his students to discuss the meaning and intent and in the end reveals that the poet has Autism.

Holding in the Storm: The Discussion Guide is offered as an aid to reflection on the meanings of the film and to stimulate ideas of ways that people with Autism Spectrum Disorder (or other differences) can be better included in our neighbourhoods and communities. We have imagined questions that the film may suggest to viewers. The guide provides some answers in an overview of what it’s like to be an adult with Autism.

Contents of Discussion Guide:
Preface by Andrew Bloomfield
What is Autism Spectrum Disorder?
Why are more people identified with ASD now?
Adults as well as children have Autism
How many Ontario people live with Autism?
How is Autism experienced in adulthood?
Gender in Autism
How typical is Matthew of others with ASD?
What makes Matthew feel he is in a storm?
How is Matthew able to hold in the storm?
Matthew’s “thought voice” and facial expressions
How Matthew communicates
An autistic poet?
Bridges-Over-Barriers by Andrew Bloomfield
Community relationships: awareness, understanding, acceptance, inclusion
Towards better lives and more secure futures
Learning more about Autism
More questions

We hope that everyone will continue to think about the film and ask questions, using this blog.
Posted by Andrew at 09:35 No comments:

Email ThisBlogThis!Share to TwitterShare to FacebookShare to Pinterest
Watch this video which explains the purpose of this film and blog. 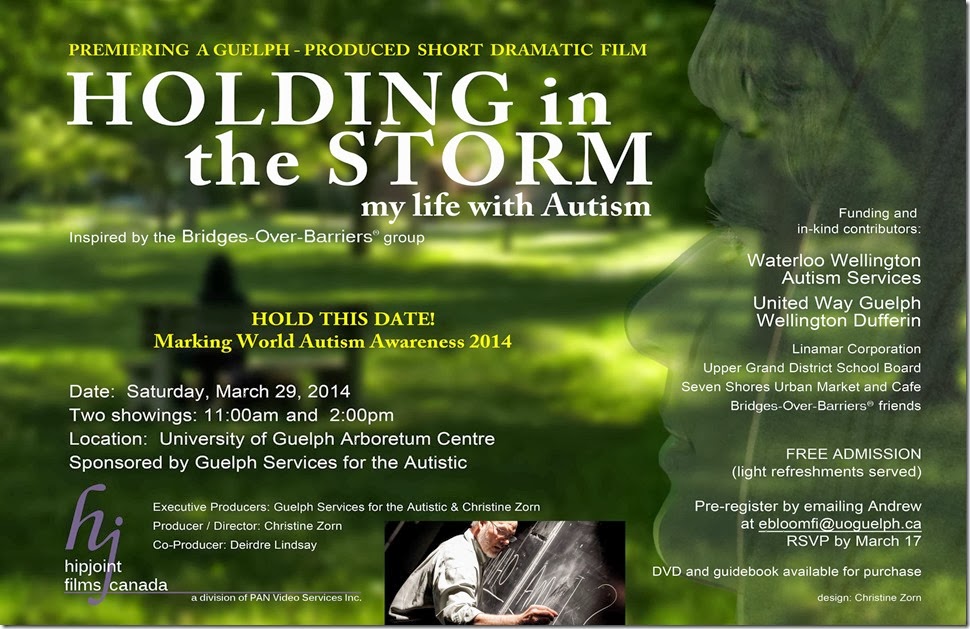